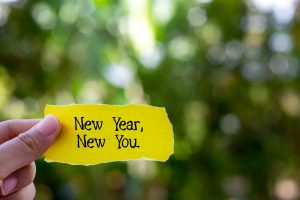 How to Stick With Your New Year

Practicing good habits is hard. If it weren’t, everyone would already be super-organized and financially responsible, whipping up healthy meals for themselves each day, and following regular exercise routines and five-year plans. At the beginning of a new year, high on the optimism that comes with fresh starts, it’s easy to forget just how difficult it can be to achieve the self-improvement goals you’ve set for yourself. But sooner or later, reality sets in, and you remember that cooking, cleaning, and cultivating new hobbies can sometimes feel impossible.

If you want to get better at building good habits and generally keeping it together, there are some simple steps to take, even if you don’t know when water is boiling or if the machines at the gym feel completely overwhelming. Below, experts in their fields break down some of the most common resolutions people set for themselves and share how a complete beginner can find success in each one—even after the excitement has worn off.

To start building new habits, you first need to set some goals: What is it that you want to do?

You don’t need much to get started — just paper and pen or something to type on, says Elise Blaha Cripe, creator of the Get to Work Book planner and author of a forthcoming book on goal setting. Before you set a goal, you should think about where you are now and what needs to change. “The first step before looking forward is looking back. Do some reflection on the past few years, year, or months. How would you describe your life? Your attitude?” Cripe says. “It’s so important to get an accurate representation of where you are at before you can decide where you want to go.”

Once you decide what you’re aiming for, set measurable goals that you can cross off a list — for example, something like “get fit” may not have a clear beginning or ending, but “go on three runs a week” is finite and easily trackable, and setting a specific distance or amount of time is even better. Most of all, understand that as you change and grow, your goals may change with you — and that’s okay. “Goal setting is something you do in pencil, not in stone,” Cripe says.

It sounds obvious, but if getting fit is one of your goals, the best way to start exercising more is to reframe the way you think about working out. “Physical activity does not have to be arduous and sweaty and gross, and you don’t have to feel like you’re going to throw up for it to be effective for your health,” says trainer Jacque Crockford, exercise physiology content manager at the American Council on Exercise (ACE). “Don’t hit it too hard and then fall back, as a lot of people do.” To start, Crockford recommends something simple: Just go for walks.

The idea that being active requires going full-throttle or access to complicated machines is “all garbage,” agrees Rachele Pojednic, an assistant professor of nutrition at Simmons University and a spinning instructor at Flywheel Sports. You need sneakers or running shoes and clothing that’s easy to move in, but those are the only requirements.

“The way we get people to exercise and to move their bodies more is to enjoy it,” Pojednic says. “That’s going to look really different for every single person on the face of this planet.” If you don’t know how it looks for you, try different things until you figure it out. That way, trying something new and hating it isn’t a setback; it’s just helping you narrow the field. Take a class with a friend, fall down a YouTube video rabbit hole, and generally experiment as much as you’d like to find something that sticks.

It’s okay to start slow and work your way up over time. Exercising between one and three times a week is a good place to start, but how long you exercise doesn’t matter, at least at first. The Physical Activity Guidelines for Americans recommend 150 minutes of moderate aerobic activity per week or 75 minutes of vigorous activity. “But that’s a goal,” Pojednic says. “Starting to build up toward that, whatever feels right for your body, is the right thing to do.”

If your skills in the kitchen are limited to ordering takeout, it’s best to start slow with simple meals, like pasta with roasted vegetables, stews made from a few recognizable ingredients, or rice-based dishes, says chef Hervé Malivert, director of culinary arts and technology at the International Culinary Center. It’s great to have big culinary dreams, but doing too much too soon could turn you off cooking entirely; instead, focus on easy meals that don’t require specialized knowledge or techniques and won’t leave you feeling overwhelmed or discouraged.

You’ll also want to make sure you have a few basic tools, like a chef’s knife and a paring knife, Malivert says. These don’t have to be elaborate or expensive: “My chef’s knife cost me $85,” he notes. Quality 10-inch chef’s knives are available for $50 to $100.

Malivert also recommends using pans that are easy to clean, rust-resistant, and made of stainless steel or nickel. “The weight of the pan is important. You want something with a nice heavy weight,” he says. He suggests having on hand a 12-inch frying pan, a six-quart stock pot, and a four-quart sauté pan, which is deeper than a frying pan. He says to stay away from aluminum and nonstick pans — aluminum because a metallic flavor can transfer to acidic food, and nonstick because “usually they’re good for a few months, and then they start losing the coating.”

As you begin using your new equipment, keep in mind that it’s okay, and even beneficial, to have some kitchen disasters. Even if the food isn’t salvageable, learning what went wrong will help you get better. And if you’d feel more comfortable getting a solid baseline of knowledge before attempting anything on your own, sign up for a one-day workshop or multiday cooking class to pick up some basic skills.

Bingeing on Tidying Up With Marie Kondo may be inspiring, but diving headfirst into her method may not end well. Professional organizers Clea Shearer and Joanna Teplin recommend starting smaller: “Don’t feel like you need to tackle an entire room at once,” they advised in an email. “It’s not always realistic and can lead to feeling overwhelmed or crying in the corner.”

As authors of the book The Home Edit: A Guide to Organizing and Realizing Your House Goals, Shearer and Teplin say that starting with smaller spaces, like the junk drawer, will take less time than trying to tackle your whole house and gives you the same feeling of a reward when it’s complete. For a space of any size, they recommend four steps:

If you don’t have the equipment to fulfill step four, it’s important to stock up on containers before getting underway — otherwise, you’ll be left with piles and nowhere to put them.

If you feel clueless when it comes to personal finance, at least you’re in good company. Gaby Dunn, host of the podcast Bad With Money and author of Bad With Money: The Imperfect Art of Getting Your Financial Sh*t Together, has spent a lot of time over the past few years trying to understand how to get her own finances in order.

The first step she recommends is simple but not easy: “The first thing you have to do is just not judge yourself,” Dunn says. Print out your bank statement and annotate it, looking for patterns in where you spend and where you can cut back. The first time Dunn did this, “I cried the whole time,” she says. “And that’s okay. You can cry the whole time, but just try to be gentle with yourself as you start.” Once you’ve done your initial audit, stay on top of things with an app like Mint (which breaks down where your money is going into categories) or Digit (which helps you save by taking small, manageable amounts of money out of your bank account at regular intervals).

Kara Stevens, founder of the Frugal Feminista website, says that getting a better sense of your financial habits can help you form goals for the future. For example, if you tend to hoard money without spending it, the next step for you may be to invest in a low-risk way that you’d feel comfortable with. “The only bad financial advice is if you don’t start” playing an active role in managing your money, Stevens says, “because you think you don’t have enough money to start or you’re too young to start.”

And if you have an emergency that eats up your savings, that doesn’t mean you’ve failed. “I think we assign so much self-worth [to money], and we assume [being bad at] money is a personal failing,” Dunn says. “But it just goes up and down, and you can always start over.” A freelance writer based in Chicago with bylines at the Cut, Hazlitt, Paste Magazine, and more.